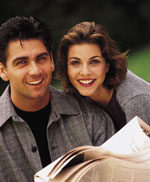 Do you look happy? sad? tired? angry? Have you ever wondered how you know what another person’s mood is just by looking at his or her face? Studies have shown that one instantaneously and subconsciously makes a determination of another person’s mood just by glancing at the position and appearance of both the eyebrows and mouth. But what if only the position of the eyebrows was varied, and not the mouth? Would you still be able to assess his or her mood or personality just by seeing the eyebrows?

Observe the four faces shown below. Notice how each face has exactly the same shape, the same smile, and the same eyes. The only difference between each of the faces is the position of the eyebrows.

Low, flat eyebrows that hang over the eyes denote fatigue, while an eyebrow that is highest in the middle denotes sadness. Downward slanting eyebrows portray anger, while highly arched eyebrows portray happiness.

Frequently, mal-position of the eyebrows can be overlooked when considering facial aging and expression. Eyebrow sagging and upper eyelid fullness occur over time as a result of gravity and the tug of war of repeated opposing muscle contractions. In more advanced stages, low eyebrows and upper eyelid fullness can contribute to peripheral and upper visual field loss. Furthermore, the heavy eyebrow skin pushes the eyelid down causing a tired appearance.

To counteract the eyebrow droop, many people unknowingly raise their eyebrows to remove the brow and eyelid skin from their visual space. These people eventually develop furrows or wrinkles in the forehead due to the constant contraction of the muscles that raise the eyebrow. In addition, there are those who are sensitive to light and frequently “squint and squeeze” their eyes. This effectively pulls the eyebrows down and leads to wrinkles between the eyebrows and at the corners of the eyes (known as crow’s feet).

Botox is an effective, temporary corrective measure for fine lines of the forehead and lines between the eyebrows. Botox works by freezing the muscle movement for several months. However, if the eyebrow is already positioned low relative to the brow bone, Botox may contribute to brow lowering since it will weaken the muscles on the forehead that are responsible for holding the eyebrow up. In this case or for the purpose of creating a more pleasant appearance, the best corrective measure is brow lift surgery.

Most brow lift and forehead surgery is now performed with the aid of a tiny camera. This endoscopic surgery allows the surgeon to make very small incisions hidden in the hairline thereby causing less nerve damage, swelling, and bruising than traditional open, coronal brow lift surgery. Because of the minimal trauma with endoscopic surgery, the patient has an overall faster recovery time.

Older patients with severe skin excess of the forehead may be better served by other brow lift techniques. Using the direct brow lift method, an incision is made slightly above the eyebrow hairs and excess skin is removed. With a mid-forehead lift, the incision is made in the prominent wrinkles in the middle of the forehead. Either incision is barely perceptible once it heals, thanks to meticulous suturing and careful attention to the healing process.

Here are some terms to help clarify the difference between an eyelid lift and a brow lift (or forehead lift):

Eyelid Surgery or Blepharoplasty is the removal of excessive, sagging or wrinkled skin, as well as fat and sometimes muscle from the upper and/or lower eyelids. This treats eyelid “hooding” and under-eye “bags” which can cause a tired or aged appearance. Reconstructive eyelid surgery is also performed when excess eyelid skin interferes with vision. The result is a more youthful, rested appearance of the eyes, softening of wrinkle lines, and widening of visual fields for partially blocked vision.

Excess eyelid skin may be a sign of drooping eyebrows, in which case a Brow Lift is the preferred treatment. In addition, many patients with concerns of lower eyelid bags actually have a sunken appearance and would benefit from fat transfer to fill in the lower eyelid area, rather than fat removal.

Blepharoplasty removes upper eyelid skin and fat through an incision hidden within the crease of the eyelid. The lower eyelid fat is removed through an incision inside the eyelid (trans-conjunctival) so that there are no visible scars. If there is a minimal to moderate amount of excess lower lid skin, the wrinkled skin can usually be treated with a chemical peel or laser skin resurfacing. Large amounts of extra lower eyelid skin may require an incision just below the eyelashes to remove the skin for effective treatment.

The Brow Lift can be approached through several different incisions depending on the individual’s anatomy, hairline, and preferences. By far the most common approach is the Endoscopic Surgery using a tiny camera through very small incisions in the scalp. Other possible incisions are just above the eyebrows, within a horizontal forehead crease, or along the hairline. The coronal brow lift incision from ear to ear is considered outdated and rarely the preferred method anymore due to hair loss, sensory loss, and greater recovery time.

Eyelid ptosis repair can be performed alone with local anesthesia and oral sedation, or in combination with other procedures such as upper or lower blepharoplasty, or brow lift surgery.