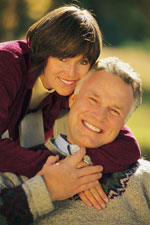 A Face Lift or Rhytidectomy removes excess skin and repositions fat and muscles to correct jowls, deep lines from the nose to the mouth, and minimal to moderate neck laxity which naturally occur with aging. Some patients having facelift surgery may also require a neck lift, neck liposuction, or neck muscle repair (platysmaplasty) for more extensive neck treatment. Since a face lift does not change the quality of the skin itself, a chemical peel or laser resurfacing is often performed in the same setting.

Usually 45 and over, however in some cases, a mini face lift may be performed as early as the late 30’s or early 40’s depending on the patient’s needs.

Good candidates for the facelift include healthy men and women who are bothered by sagging, loose skin along the lower face and the upper neck. Patients may also have unwanted jowls along the jawline. The facelift does not improve deep smile lines known as nasolabial folds. These are better treated with a midface lift and/or volume enhancement with dermal fillers.

The incision is made in front of the ear, inside the ear, and then extends behind the ear by the earlobe. The skin, fat, and muscle are separated, lifted and then re-draped to a more youthful-appearing position. Often times, the fat and muscle are sutured in place to prevent premature descent. Dr. Hoenig is an expert in the deep plane face lift, SMAS lift, and other advanced facelift surgery techniques. Extra care is taken in suturing the incision to minimize the scar, rendering it virtually invisible after the initial healing period.

“Dr. Hoenig is the best – he did not over correct, he is a very caring, concerned person.
My husband had his waddle removed and he is just as pleased.
It was well worth the money in just how I feel about me now.”

What’s the difference between a facelift and a mid-facelift?

In short, a face lift, will address cheek laxity, jowls, and neck laxity. It usually involves tightening not only the skin, but also underlying fat and muscle.

What’s the difference between a lower facelift, a mid-face lift and an upper facelift?

What most people refer to as a facelift is typically includes a lower face and neck lift. With a lower facelift, jowls are removed, a sagging neck is reversed, neck muscles and tightened, drooping cheeks muscles and fat are lifted and sutured into place, and finally excess skin is removed.

A mid face lift addresses drooping of the cheeks under the eyes, and involves lifting of the cheek skin, fat and muscle vertically. This is also referred to as a cheek lift.

An upper face lift addresses aging of the upper third of the face, which includes a brow or forehead lift, temple lift, and upper eyelid surgery.

Face lift surgery is performed on an outpatient basis usually with IV sedation and usually takes 4 to 5 hours. Stitches are removed in 7 to 10 days. Most patients return to work after 2 weeks. For patients interested in traveling to southern California or Los Angeles, face lift surgery necessitates usually a minimum one week stay.